Located along the bank of the Wisconsin River, Pauquette Park in Portage WI has long been an idyllic spot for residents to enjoy many year round activities such as concerts, picnics and cookouts, fishing, basketball, playground equipment, and in the winter – ice skating.    The idea of erecting a multi-use band-shell had been on the minds of the city and its residents for a number of years.  Not only would the structure enhance the park, the pavilions primary purpose would be to provide shelter and improved acoustics for the Wisconsin Chamber Orchestra, who for over 25 years has performed an annual Concert in the Park.

Bidding for the Pauquette Park Pavilion & Trails project was split into two contracts.  Holtz Builders was awarded Contract #1 for the new construction of the open-air style Park Pavilion.  To ensure proper scheduling and timely completion of the project, both general contractors had to maintain close communication.

Four days of rain is not the way anyone wants to kick off a project but that’s what we had to work with!  The ground was too saturated to get trucks in to remove the debris from cutting down the trees on the work site, demolish and remove the concrete of an existing deteriorating concrete pad and stripping all of the topsoil from the building location, and extend the area 15’ beyond.  Due to the close proximity of the job site to the pond, constant monitoring of environmental controls to keep construction debris out of the water was necessary.  Again, close communication on environmental control was necessary as it fell under the scope of the other general contractor. 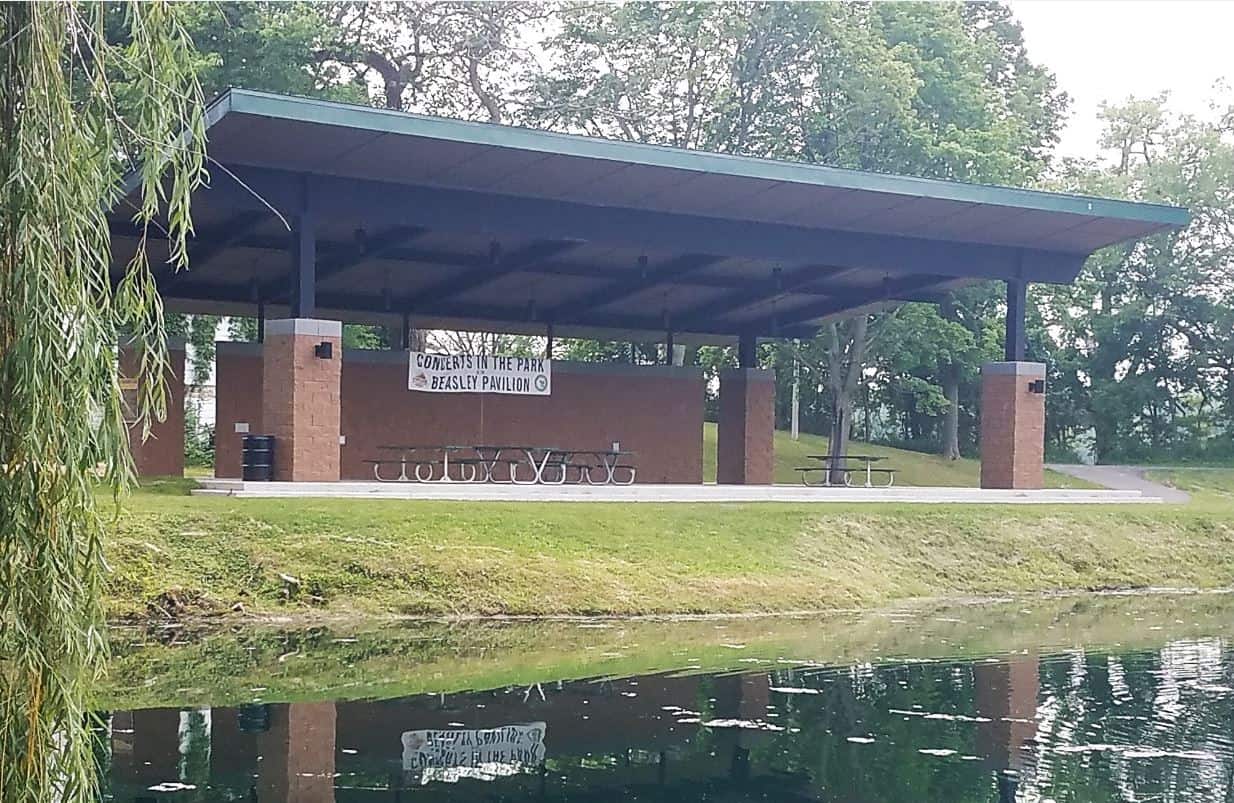 Expect the unexpected:  As excavation for the building footings got underway, General Engineering Contractors asked Holtz Builders (HBI) to raise the building one foot due to the ground water being at a higher elevation than thought, to prevent water issues on the pavilion.  A soils engineer was brought in to review the soils condition and determined that the existing soil would not meet the 2000 PSF.  They recommended we undercut 2’ and install a 3” clear breaker run and then install the footings.  With the help of the site subcontractor, HBI was able to resolve the issue quickly and not lose any work days. The concrete footings, concrete wall and concrete piers were finished in three days.

About two weeks into mobilization, the neighbor living next to the job site expressed that she felt too many trees had been removed on the south side of the job site nearest her property line, leaving her home and front yard more exposed to visitors in the park.  The Project Manager contacted the City of Portage and asked if someone could come out to the site and talk to her.  She agreed to the city’s proposal to pay for and plant Arborvitaes to give her some privacy.

Weather delays and minor mishaps:  Rainy weather meant lost work time and a few schedule adjustments so that sub-contractors would have time to complete their scope of work before other crews could come onsite and get started. These changes needed to be relayed to the general contractor of the 2nd contract.  Unfortunately, the painters hadn’t secured their plastic and got black paint on the concrete slab in numerous areas requiring them to take additional time to get the areas cleaned and pass inspection.

During installation of the green treated lumber onto the structural steel, it was discovered that the steel and the 2x material was not getting to the correct height the plans called for it to be.  The Project Manager met with the General Engineering Company to discuss how to solve the discrepancy.  They agreed that adding some 2x material would not only assist in the trimming portion of the scope but would save in labor costs to install it.  With that change, HBI was able to do this at no extra cost to the City of Portage. As work progressed on the brick back wall and the piers, a ‘gap’ issue arose that had to be remedied.  The back wall block was 7 5/8″ and the steel column base plate was 8″. The solution was to cut a block at the base plates and epoxy the pieces in to cover the base plate.

All of the hard work, years of planning & designing, countless meetings with many departments & organizations and fundraising for the project culminated on the evening of June 25, 2021 with a ribbon cutting ceremony and the Pavilions opening night performance by the Wisconsin National Guard 132nd Army Band, sponsored by Holtz Builders Inc.