In 1995, the Wilderness Hotel and Golf Resort opened for business along U.S. Highway 12 in Lake Delton Wisconsin with a 35,000-square-foot water park named Fort Wilderness. This is the story of renovating the original building to include a new state of the art kitchen, bar, indoor dining, outdoor dining, candy cabin, retail and lobby along with a complete new exterior facade including the Las Vegas style Porta Cochere.

When Holtz Builders was approached by the Wilderness about remodeling their existing building, we were very excited. Once we saw the plans, we were even more eager to transform the original building. HBI was asked to do a design build for all the MEP phases of this project. We reached out to our vast network of contractors to set up interviews and go over the specific needs of this project. While this was taking place, we were also bidding out the other portions of this project. Site work included: a whole new front entrance, structural work for the new trusses, glue-laminated post and beams, and all unique finishes–some being imported from Italy. With our contractors picked, we now were able to start on scheduling. One of the first scheduling hurdles in remodeling a building especially in Lake Delton is keeping the guest experience to a level that everyone expects. This took a couple meetings and presentations to the Wilderness Team. At HBI, we pride ourselves on communication and with remodels it is imperative as the space sometimes will continue to be used. Now we get to take all the planning we’ve done and put this into action. 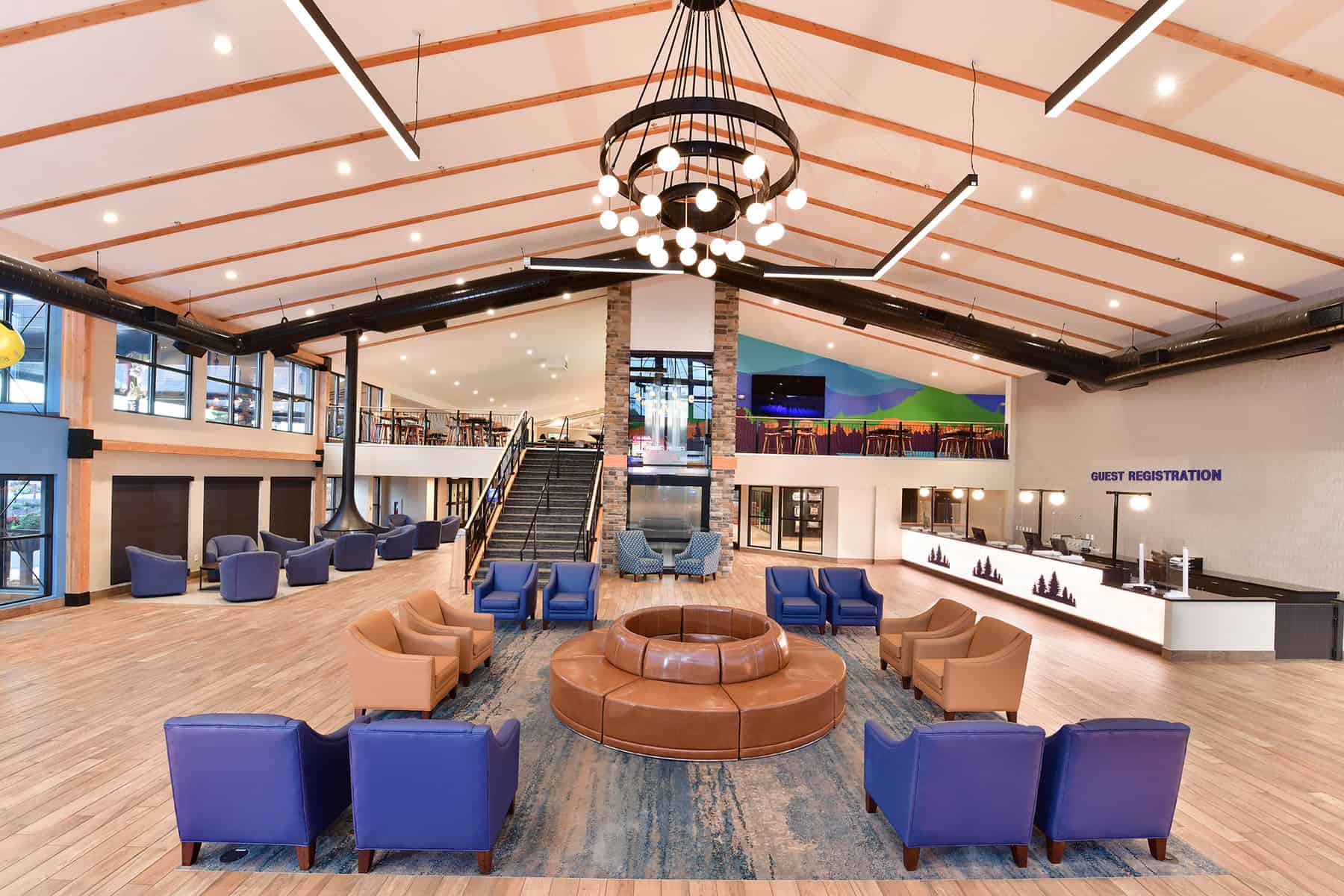 Our first step in phase one was to demo the existing kitchen on the second floor, the dining area and the bathroom. In order to do this we needed to build temporary walls, drywall and paint to keep a smooth transition for the guests, especially since the main lobby was being utilized. Our team was able to start with removing the old duct work, drywall, flooring, electrical, insulation. However, there was a thought that the existing ceiling which was flat would be really nice if we could get those to be cathedral ceilings. HBI started thinking how we could do this while keeping the roof on since taking it off was not an option. We figured it out. We would remove a section of the roof from truss to truss and slide a new 60 foot cathedral truss in next to the existing flat truss, which we would then cut the old truss bottom chords out. It was working great.

This process allowed us to keep the building watertight while getting the Wilderness what they wanted for their new look. This was from one side of the building to the other side–that is over 120 feet of new trusses and roofing! From this change it caused all the MEP that were in these trusses to be relocated including fire suppression that needed to stay active. Things were going really well at this point. New framing was getting in place, mechanicals were being installed. Then came drywall and paint. After painting, the finishes started, and it is very unique. This was definitely going to make a statement. The wood finishes that HBI was able to perform made this renovation have a very contemporary style. Following this, all of the new kitchen equipment was being brought in and hooked up by our MEP team.

It was during this phase when phase two was introduced to the project team. The Wilderness team wanted the WOW factor. Compared to phase one, this was going to be WOW multiplied by 10. But we still needed to finish the interior of phase one. Part of phase one was connecting this to the new Take Flight Theater which HBI was also constructing at the same time. We were able to take the original deck off the lobby and use that for the new corridor to connect the new cafeteria to the Take Flight Theater. FFE began coming into the building and then the float airplane was delivered. We took the float plane and hung it 25 feet in the air over the dining area at Camp Social. Everything was starting to flow from the lobby renovation to the new Take Flight Theater.  HBI was able to complete phase one just in time for Wilderness to use this new space for the winter holidays.

Phase two then began right out of the gate in January. We had already done the pre-planning to make sure that everyone was on the same page. The trusses were ordered which added to the timber-frame-look at the new lobby. The new lobby was in the location of the original indoor waterpark. Again, we needed to construct this building from the inside out. We started by removing concrete floors then pouring new frost walls to support the new glue-laminated post and beams. Our team also reframed the complete exterior to add more windows for the cabin-aesthetic Wilderness aims to resemble.

Everything was going as planned and the guest experience was still being upheld by all of our contractors. Our team installed the footings for a new glass elevator. Then Covid 19 came into all of our lives. Face mask and social distancing was now mandated by HBI to ensure we helped to slow the spread. When the Government shut down places like the Wilderness Resort, it truly hurt the morale around the project. However, now that the Wilderness was shut down HBI could start all of the exterior site work which included rerouting fiber, gas and power. Then we had our excavation company start with the removal of the old entrance and the original porte cochere which was on a hill fifteen feet up. We found bad soils rather quickly, so we undercut and filled back with the approval of the soils engineer. New storm lines were installed, lowering the existing six inch water main to ensure that we had frost protection. We continued with the site work, pouring a fourteen foot retaining wall, and four-by-four piers which would support the new porte cochere that now can park twenty cars underneath.  While we were doing the site work, we began receiving all the storefront windows and glass installments. The new remodel was not only looking like a brand new building on the inside but also on the outside. The glue-laminated post and beams arrived. We had to install these from the inside which also had its own challenges, but with a couple of forklifts and great planning, we were able to get these installed. The interior now had forty foot ceilings instead of twelve foot ceilings. We brought in our drywall crew and they strapped in to the lifts and went to work–in no time we had the ceiling on. Electrical finishes started as soon as the paint was dry.

A chandelier from an old hotel in Chicago was going to be the focal point in this lobby. But how do you change light bulbs and clean a chandelier that is forty feet in the air? Well you install an electric winch to raise and lower it of course. The flooring company began installing the tile in the lobby area which was carried on through phase one of this remodel. Checklist items were being completed. Which is a good thing since the government began allowing businesses, like the Wilderness, to reopen. Our team was given a date to finish phase two. However, there was still a lot of work to do! We received the steel for the porte cochere, so the erectors started their process and brought in enough workers to finish this project in record time.

The LP smart siding was being installed along with the new fascia, colored concrete was being placed for new outdoor seating areas, the seven outdoor gas fireplaces were getting masonry on them, the porte cochere was getting the lights, and speakers were installed on the one side while on the other the finished soffit was installed. Gutters and downspouts were being tied into the storm sewer. It really looks like we are going to make the opening date.

We started our pre punch list on the complete building, bringing all contractors in, and we walked the project. This really assisted us in having a thorough punch list. As we pointed out items, the contractors were able to get on them right away. We were able to minimize the overall time that a normal punch list and execution thereof would take. Owners were bringing in the furniture, computers, printers and decorations in order to create the ultimate guest experience. It was amazing to watch all of these different teams working towards the common goal of the 11:00 am opening day. The first customer arrived, parked under the new porte cochere, was greeted by the General Manager of Wilderness and brought into the newly remodeled Wilderness Lobby. That is what success looks like and the reason why we at Holtz Builders love working in construction. To take the vision someone had, get it on paper, put the team together and build something that will create lasting memories for everyone who comes to the Wilderness Resort.